L.A. native Caryn Ward Ross has been in the entertainment industry for a number of years. She started her acting career as a child (Fame, Webster), took a hiatus around her college years, and eventually returned to recur and co-star on a variety of shows like Entourage and The Game.

Now Caryn has stepped into a new role as Executive Producer, working alongside her husband Craig Ross on the upcoming project Craig Ross Jr.’s Monogamy. (In which she also stars.)

I caught up with Caryn Ward Ross on her expanding career, as well as relationship, storytelling, and being happy.

It’s a provocative scripted drama series—a limited series —we shot six episodes. Craig Ross Jr’s Monogamy centers on four couples who are at the brink in their marriages and desperate to find a way to heal.

As a last-ditch effort, the couples agree to participate in an unconventional form of therapy with the hopes of reviving their failed relationships. It’s quite a journey. My husband wrote it, I helped develop it.

I was pregnant when we were developing it. I had a rare, debilitating pregnancy disease called Hyperemesis Gravidarum. Basically, the body rejects the pregnancy hormone. I was throwing up nonstop. I was actually shooting a TV series at the time, another series called Grown Folks, and I’d be in the bathroom puking my brains out, fix my makeup and go back to set. It was wretched. Everyone kept thinking “this is morning sickness, this is normal.”

The breaking point came when I was vomiting for maybe the sixth time in one day, blood gushing out of my nose, and my four-year-old daughter is running through the house screaming “this is not normal!” Eventually, I had to be isolated in a dark room. Light, sound, even patterns would make me vomit.

Somewhere around six or seven months, I was able to sit up and started helping my husband with the project. We developed it, we hired writers, worked with Urban Movie Channel, and shortly after I gave birth we started shooting it. I was on set with my baby, breastfeeding in between scenes, shooting with my husband.

How did you get through that experience?

It was devastating for my entire family, I got to a dark place. I really learned the power of meditation, 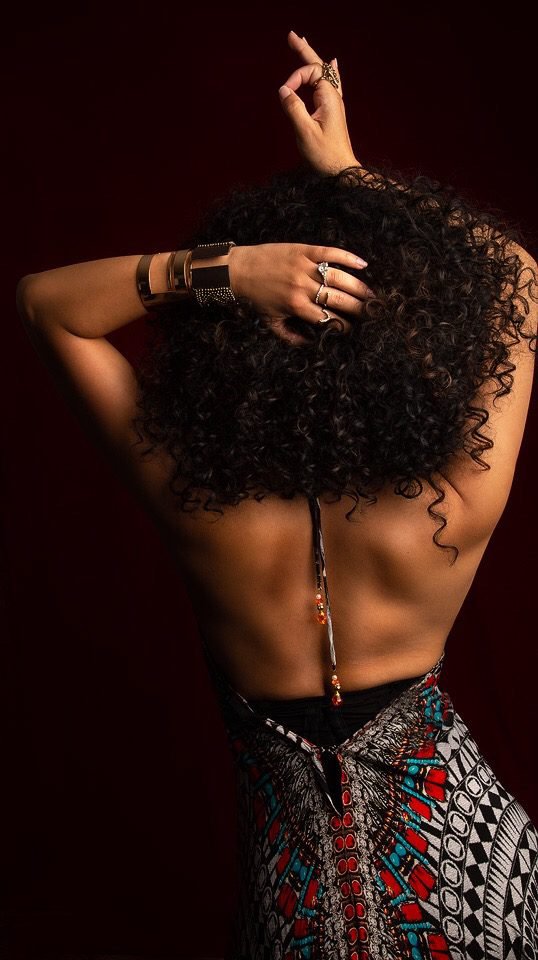 visualization, and hypnosis. I used clinical hypnosis sessions with an amazing woman named Susan French. She worked with me to send messages from my subconscious mind to my body to try and function.

I apply meditation, prayer, and visualization to everything I do. In creating my world, creating my reality, it’s very important to me. Our relationship was tested, but we prevailed. And we have another beautiful baby girl.

I think the show is going to force people to examine their expectations in relationships. We have these fantasies in our culture that one person should fulfill every need, mentally, physically, spiritually.

We buy into this notion that it’s incumbent upon our partner to anticipate and fulfill our every need all the time, every time. This often leads to disappointment, and many instances, heartbreak and betrayal.

We wanted to take an unflinching look at that. We wanted to really get in there and explore the meaning of monogamy—to shake things up a bit, to get people thinking and talking.

Having honest conversations. My husband created these complex characters who engage in this unorthodox experiment.

In that process, they see themselves in a way they could never have imagined. I’m proud of what we’ve done and Craig’s vision for the whole thing.

It’s amazing. He drives me crazy at times. A lot of times! But we create on so many levels, we create babies, we create movies, we create TV shows, it’s the ultimate…I wouldn’t want it any other way, put it that way.

We hold each other accountable too. Where are we falling into negative habits? Where are we limiting out infinite potential and how can we open ourselves up as vessels to let that force come through?

For us, a lot of our creativity seems to come through in the form of relationships, marriage, sexuality and pushing boundaries in that way.

It’s such a primal thing; we like getting underneath that, tearing apart convention and structures, and seeing what there is to discover. That’s what makes life delicious, right? As an actress and writer, that’s so fun for me, and as a director and filmmaker, it’s exciting for him too. It’s like the perfect marriage, pun intended.

For me, it’s really empowering to be in the space of bringing forth a character. My character in the series comes from abuse and drug use and prostitution. She’s turned her life and married a homicide detective. A lot of times in relationships we fall into these unconscious patterns: there’s a person that needs to be saved and someone who’s doing the saving, and when you renegotiate those roles it can turn things topsy-turvy.

At the core of our of the show are couples who are censoring themselves in some way. We see what happens when people aren’t allowed to really express who they are and what they need. Over time, we all change in relationships and there can be consequences if you don’t update those agreements.

My husband I both try really hard to allow that, both in our marriage and in our creativity. It takes work and conscious intention. I’m enjoying being an actress who’s been in this business for a while, to also being a producer and having a say in the conversations with the network, input on all the visuals and marketing assets that come out.

Every facet of the show, I have a contribution. I don’t want to go back to “here’s my audition, here’s my headshot.” I’m really relishing it. I feel more empowered. To be able to do that with my husband, my best friend, is an added blessing.

Anything you haven’t done yet that you’d like to?

You mean besides star in a movie with Idris Elba!? Once we get the premiere going I’d like to get back to {writing.} It’s one of my passions. I’ve got some deep, deep stories to tell that I want to get out of me.

I do have a passion project, a television series that I’ve been writing for years that I do want to get back to and bring forth. It deals with this concept of ‘Bruja’ which is in the zeitgeist right now and seems really ‘new and cool’ to talk about it. But in actuality, there is a long, sacred history to it. I want to do it justice. I have always been drawn to the spiritual, mystical and philosophical realm of life.

My writings deal with the intersection of Black womanhood, sexuality, and mysticism. I have a project that’s been brewing in me for years so I’d like to bring it to light.  There’s a lot of information in it in terms of African spirituality, Mother-Goddess and the stories that I want to tell around that.

With Craig Ross Jr.’s Monogamy, I’m also in the process of launching a clothing line, The House of Monogamy. At the end of the day, it’s about just being my best sparkly Self. I want to be authentically happy. Not “Instagram happy”,  but inside of my body, my mind, and my heart happy.

That’s really what matters most to me. I want my kids to be so internally focused that their reference point is internal. That’s true power, and that’s what I work towards.

Craig Ross Jr’s Monogamy premieres this Friday, May 4th on www.UMC.tv. New episodes will be added every week on Fridays through June 1st.