As a beautiful and interesting destination, there are many facts about Joshua Tree. Joshua Tree is technically both the name of a National Park in California’s Mojave desert as well as the plant that the park was named after. (AKA the Yucca brevifolia.) These days it’s a popular destination for hiking, star gazing, and taking cute Instagram photos. Just kidding on that last one. (No, I’m not!)

I myself love the area and have been lucky enough to have access to my uncle’s Airbnb destination Shelter Joshua Tree, which is about as chic as can be. The area is still extremely remote for being a mere two-hour drive from Los Angeles (without traffic), which means that pretty much anywhere you might be staying out there it will still feel like desert living.

And those star views…seriously. Incredible. The light pollution of bustling Southern California doesn’t reach out there, which means mostly unobstructed star views for as far as you can see.

In the mid-1800s Mormons were migrating, and when some came upon the Joshua Tree area they decided to settle there. They named the area after the Joshua Tree plants, which they were into on account of the fact that the plants reminded them of the Bible’s Joshua reaching toward the sky. While the Mormons are credited for naming the area, they were not the first to live in the area. Far from it.

Humans have been living in the area that is now Joshua Tree National park for 5,000 years

Long before the Mormons, Joshua Tree was inhabited by Native Americans starting with the Pinto Culture and followed by the Serrano, the Chemehuevi, and the Cahuilla. The Spaniards arrived in 1772, cattlemen headed in the early 1800s, and then homesteaders starting laying down their claims in the early 1900s.

That fun fact about Joshua Tree is actually a really important fact.

Slightly misleading, but true. While U2’s fifth studio album does, in fact, feature a Joshua Tree on the cover of the album, that particular Joshua Tree was located in Darwin, California, which is about a full 200 miles away from Joshua Tree National Park.

The Eagles, on the other hand, did shoot an album cover there

The 1972 album cover for the Eagles debut studio album Eagles was shot in Joshua Tree, as a collaboration between creative director and Grammy Award-winner Gary Burden and photographer Henry Diltz.

Burden was on the forefront of arranging album cover shoots out there, which also included one for the Americas. Burden has been quoted as saying that he likes how the desert forces people to pay attention:

“When I was in other parts of the world I would hear impressions of people who had never been to California talking about how boring the place is ‘…there are no seasons, it is always the same, there is no change in the plants like there are back east…’ and I would have to argue that we do have seasons.

Even in the most barren parts of the desert, there are little plants that bloom with the tiniest of flowers, leaves that change color… Seasons! But subtle seasons and changes you have to pay attention to enjoy. Maybe even get down on your hands and knees to see the tiny plants and animals that you could easily walk right by or tread on and never notice.

You have to pay attention! I’ve always liked that. I love looking out across a seemingly monochromatic desert landscape and then noticing and treasuring the beautifully colored delicate flowers erupting in a profusion of colors.”

The Eagles song “Peaceful Easy Feelin’” — featuring the lyric, “I’d like to sleep with you in the desert tonight,” was also inspired by a camping trip in Joshua Tree, revealed by Glen Frey in 2005.

Joshua Tree is a desert, but it’s full of mountains

There are actually six different mountain ranges in the 1,235 square miles that cover Joshua Tree National Park. You might come across the Little San Bernardino Mountains in the southwest, the Cottonwood, Hexie, and Pinto Mountains in the middle area, and to the east, the Eagle and Coxcomb Mountains.

The park is also a meeting point between the Mojave Desert and the low Colorado Desert. The elevation varies dramatically in those two desert ecosystems, which means the plant life varies in them as well.

Those hiking trails have been around for a long time

There are 191 miles of hiking trails in Joshua Tree National Park, and some of those areas are good for rock climbing. In fact, there are 8,000 different climbing routes designated in the park. And those rocks have been there for a while…some of those rocks are 1.7 billion years old.


Many think Joshua Tree is a UFO hotspot

Many people think that the desert is a literal landing place for UFO’s, making it a popular place to visit when UFO sighting is on the vacation agenda. According to UFOlogists, Joshua Tree is located on what’s called the 33rd North parallel – same as Roswell, New Mexico. The Joshua Tree area supposedly has many underground waterways with high mineral content, and some people believe that there is an undiscovered alien base somewhere in the midst of the desert.
The “Woodstock of UFOlogy,” hosted by Dr. Steven Greer, is held out there yearly to teach interested people how to contact the ETs.The Byrds’ Gram Parsons was one believer who dedicated many of his weekends to Joshua Tree. After he died of a drug overdose in 1973 at the Joshua Tree Inn, roadie Phil Kaufman stole Parsons coffin from LAX, burned his body, and scattered (some of) his ashes at Cap Rock.

Whether or not that’s your thing, the vast area of Joshua Tree is actually full of things to do. It’s best to visit the park between the months of October and May due to its tendency toward extreme weather. (Ie super hot.) However, it also gets quite cold at night, and occasionally, like the winter of 2019, it snows. 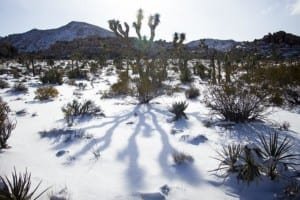