Like Company delves into the often-overlooked occurrence of casual racism, something that director Michael Cary Hooks has experienced and hopes to play a part in exposing. So far the project has been privately screened and submitted to a number of film festivals. Ideally, it will premiere at one of them.

I’m not entirely sure where I met Michael Cary Hooks some many years ago, but it had something to do with overlapping social circles here in L.A. I recently reached out upon hearing about his directorial debut with the short film, which we’ve discussed here.

I caught up with Hooks about the intention of the project, the anxieties of crowdfunding, and the art of directing. 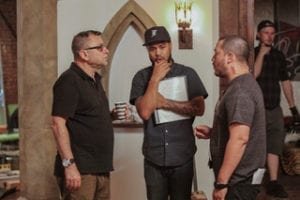 Tell me a bit about your background in filmmaking and the industry.

This is my directorial debut. I’ve been around filmmaking my entire life. I guess you can say it’s in my blood. My Dad, Kevin [Hooks], is a film/TV director and my grandfather, Robert, is a film/TV/theater actor as well. Some of my earliest memories are of me running around sets.

My Mom tells a funny story of when the two of us went to visit my Dad on the set of a TV show called The Young Riders. The show took place in the wild west, so we were on location in the middle of the desert in Arizona somewhere.

My Dad had set up this shot with a whole bunch of cowboys and their horses riding into town. After the cowboys finished this epic ride into town, one of the actors was supposed to deliver one of his lines. However, every time he was flubbing his line. So on this particular take, the boys ride in, and lo and behold the actor doesn’t get his line right.

Before my Dad got the chance to end the scene and reset for the next take I, all of 3 years old at the time, yelled “Cut!” Everyone on the set busted out laughing. Since then I’ve worked on various TV series, such as Prison Break, Lincoln Heights, Supernatural, and a mini-series called Madiba. 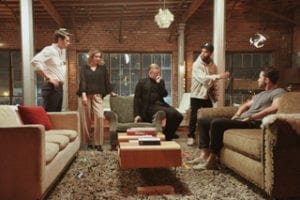 You were born ready. Why are you drawn to directing?

I’ve always had quite the imagination and have always played out scenarios in my head. Directing allows me to bring those scenarios to life the way I see them.

Is there anything about it that challenges you?

Personally, the biggest challenge is trying to recreate the vision I’ve created in my head on set. It’s never going to be exactly how I envision it, but part of the fun is trying to get it as close to that vision as possible. The script serves as a blueprint, but the whole point is to elevate what’s in the script.

Everyone on set speaks a different language, everyone from the actors to the cinematographer to the makeup artist. As a director, it’s my responsibility to be able to speak all those languages and articulate my vision so that cast and crew know how to go about their jobs and get the best results possible.

How did you come across this script, were you approached with the project?

It’s actually quite serendipitous how I stumbled upon the script. I was at a friend’s birthday party in NYC. After about an hour of awkwardly shadowing my friend around the apartment as he played host to a party full of people I didn’t know, I sat down.

Not too long after I took a seat, a friend of mine from high school walked in. I’m glad he did otherwise I probably would’ve continued to sit by myself being anti-social. My friend being there made striking up conversations with strangers a lot easier because he’s got a real outgoing personality.

Next thing I know, I’ve been engaged in a 45-minute conversation about film and literature with this woman who proceeds to tell me, “This party’s lame. I’m going to my friend Zack’s. You should come— I think you guys would get along.” I’m not sure if she assumed me and Zack would get along because we’re both Black or if she genuinely thought we’d connect, regardless she was right. Zack and I hit it off discussing everything from Nikolai Gogol to Kamasi Washington to Shia Lebeouf.

It’s now approaching 3 AM and I’m about ready to call it a night. As I’m on my way out the door, Zack insists that I meet his buddy Bijan— also Black. Cut to a week later, and Zack, Bijan and I are back at Zack’s apartment discussing what it’s like to be black and attend predominately white schools and the cultural differences that become so apparent when you’re in that type of situation.

It’s a rare occurrence for me to be in the company of someone who’s had a similar upbringing as myself— let alone two people. We chatted for hours. At a certain point, Bijan mentioned that he and Zack had written a short screenplay that touches on the topic of casual racism and they were looking for a director. I told them to email the script and the rest is history.

Tell me your thoughts about casual racism.

Casual racism is definitely a thing. For those that don’t know what it is, it’s the idea that one doesn’t have to subscribe to the ideology of racial superiority or incite racial violence in order to say or do something with racist implications. In most instances, casual racism isn’t intended to cause offense or harm. Having grown up attending predominately white schools and being a part of that particular milieu, I’m extremely familiar with this concept.

I can’t tell you how many times I’ve been in a situation where I’m the only black person and something offensive is said by a non-person of color, only to be told, “but you’re not actually Black,” when I call someone out on their bullshit.

It’s an insult because I know the subtext of that statement— “You’re not actually Black because you don’t act or speak like a Black person is supposed to.” Well, how are we supposed to talk and behave? 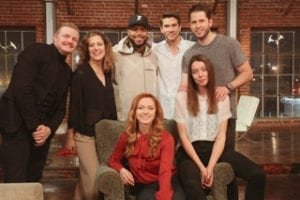 The main character in Like Company is turning away from a lot of things at once. Racism, classism, habits, relationships. She’s over it. Was it important that she hit a boiling point to walk away? Where does she go from there in your mind?

Yeah! It was important for the story arc. Initially, our protagonist, Taylor, who’s desperately trying to impress these art world people, lets a lot of their questionable behavior go unchecked in order to not ruffle any feathers.

Once she’s made up her mind that she doesn’t care what these people’s opinion is of her, she stands up for what she believes is right. From here, in my mind, I imagine she sets out to find a new circle of friends— ones that aren’t so racist.

Why is this a story that needs to be told? What do you hope people take away from it?

It’s a story that needs to be told because there needs to be a continued conversation about the concept of casual racism. I feel like a lot of people will be able to relate to the situations in the film, whether it’s from the perspective of the protagonist or the opposing point of view.

Being aware of casual racism and understanding its effects on those it marginalizes is the first step to improving race relations. The second step is to speak out against it when it occurs.

How do you connect with your actors as a director?

How was the crowdfunding process?

Oh boy! I can honestly say the crowdfunding process was unlike anything I’ve ever done before. There’s such a range of emotions that come with launching a campaign. Excitement, doubt, sadness, joy, gratitude, etc. We launched a 21 day, Indiegogo campaign with a flexible goal of $35,000.

The flexible goal just means that even if our goal of $35,000 wasn’t met, we would still get to keep what we raised. We ended up raising $35,546, but my anxiety has never been that bad in my life. It didn’t matter if we raised $5,000 dollars in a day or $0 (I think that happened at least once, maybe twice).

I couldn’t sleep at night, I was glued to my computer screen watching the donations come in or not come in, and my main means of exercise during those 21 days was pacing. After reaching our goal, I did feel overwhelmed with gratitude. The outpouring of support I received was unreal. Thanks again to everyone who made a contribution. Now, with all that being said, I definitely wouldn’t do something like that again unless I absolutely had to.

What’s next for you?

I’m really looking forward to the opportunity to attend some film festivals and show the film. All the while, I’m developing my first feature film project. It’s a semi-autobiographical, coming-of-age story about a young, Black kid dealing with culture and identity issues while having to navigate life at a prestigious, predominately white, private, high school.