TASCHEN will soon release a 20th-anniversary version of the photography book The Helmut Newton SUMO. 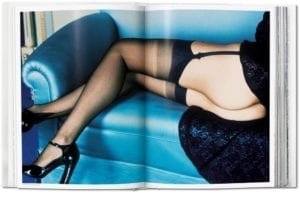 It of course featured incredible work by the renowned photographer in his signature style, capturing high fashion of the times, provocative mise-en-scènes, and evocative celebrity portraits.
The recent rerelease of the book is an XL edition, revised by Helmut Newton’s wife June Newton, who is also a photographer working under the pseudonym Alice Springs. (The two met in Australia after Newton escaped Nazi Germany, BTW.)

Newton has been credited as being the person who introduced empowering female nudity into fashion photography, which had previously been rather straightforward and conservative. He was a genius at blending simplicity, boldness, and journalistic styles into his work, all of which is still emulated today.

The 20th-anniversary version of The Helmut Newton SUMO was released in July 2019, and is available for purchase now.